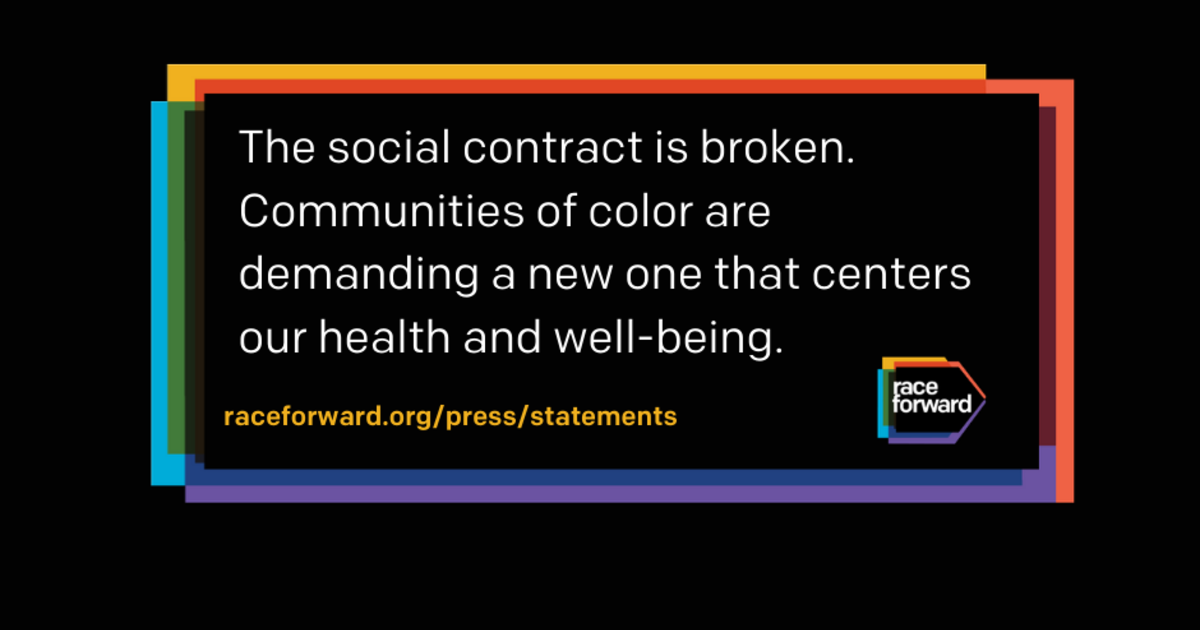 In the days since four Minneapolis Police Department officers killed George Floyd, hundreds of demonstrations have broken out around the country. Race Forward stands in solidarity with the millions who have marched to demand justice for George Floyd, Breonna Taylor, Ahmaud Arbery, and for those Black lives who have been taken prematurely by police brutality. We join their condemnation of all forms of racist violence, whether state or state-sanctioned or from individuals and groups. We join the call for the arrest and prosecution of all four officers involved in this merciless murder.

We recognize that these protests took place in a week when a white woman in New York City’s Central Park called police on a Black man who had only asked her to leash her dog in a section of the park where that was required. We have witnessed police across the country—in the name of “public safety” and the protection of property—brutalizing and arresting peaceful demonstrators, including children and the elderly, and firing rubber bullets at demonstrators, journalists, and bystanders. We have heard our President urge leaders to “dominate” protestors. We see him pressing the National Guard and the U.S. military into service against Americans who march to oppose racist violence.

All of this is occurring as a pandemic has taken more than 100,000 lives, disproportionately those of Black people, Indigenous people, other people of color, immigrants, and the incarcerated. Many have been deemed “essential” workers, and required to work without being provided the gear or equipment to protect themselves from the virus. They are deemed exploitable and expendable. Their forced labor is valued over their precious lives. Or they are simply abandoned. Over 40 million Americans are unemployed. Black and Latinx people have been twice as likely as whites to lose their jobs.
After mainstream news outlets began in April to report on racial inequities in COVID-19 infection and death rates, armed white terrorists stormed government buildings to demand that officials remove quarantine orders and “reopen the economy.” While those who work in the White House enjoy all of the practices and protocols recommended to prevent the spread of the virus, they refuse to support state and local governments that are trying to make the same available to all—exacerbating health inequities in a murderous cycle.

Americans face a trifecta of crises—state and vigilante violence against Black people, a pandemic, and an economic depression. Political leadership—beginning with the White House—offers us only a toxic combination of malign neglect and counterproductive, divisive measures. The structures of racism that leave Black, Indigenous people, and people of color more vulnerable to death than whites are being laid bare. The social contract is broken. Communities of color are demanding a new one that centers our health and well-being, and pivots toward life.

In this moment, we at Race Forward affirm with a renewed sense of purpose our work of catalyzing the racial justice movement. In media, advocacy, training, research, policy, and narrative, we will continue to center communities of color that are setting the course for a shared, equitable future.

We stand with the Movement for Black Lives and communities of color across the country who are calling for divestment from police and investment in health, education, housing, arts and culture, and the environment. We support community calls for policy changes, such as establishing a national database of decertified officers and ending cash bail. We commit to work with governments, institutions, and community organizations to advance far-reaching reforms and to abolish the current system of policing and prisons. We support and lift up the work of local Black-led organizing on the ground in communities across the country, like the Black Visions Collective, Reclaim the Block, and these organizations in Minneapolis and St. Paul.

Most of all, we vow that we will not stop until we all live in the kind of just, vital, multiracial democratic society that we all deserve. Justice is our horizon line. We look forward to walking alongside you on this march to freedom.

A message from the Government Alliance on Race and Equity Director, Gordon Goodwin

The murder of George Floyd in Minneapolis ignited pent-up rage and grief in communities across the country, many of which are reeling from the health and economic effects of Covid-19. The pandemic has brought decades of racial inequity in healthcare, housing, education and employment into plain sight, as Black, Indigenous, and other people of color bore the brunt of the crisis in rates and severity of infection, hospitalizations, and deaths. These combined crises plainly demonstrate the existence of institutional and structural racism and government’s role in maintaining systems that harm communities of color. Government’s legitimacy can only be secured if it ensures the safety and well-being of all of us.

As government leaders committed to racial equity, you have the power to change the narrative from governments that harm, to governments that can repair. As city, county, and state employees, you have the capacity to make decisions that will impact how communities of color will be affected in the wake of this crisis. Decisions on issues like policing, transportation, the status of frontline workers, and many other important aspects of our lives, requires careful, informed racial equity analysis to prevent further harm to people of color in the communities we are called to serve. In order to support all your residents – not just those with the most money or historical political clout – it is imperative to center race in our work and decision-making. Our data shows all of us that communities of color are most adversely and disproportionately affected by Covid-19, police brutality, housing affordability, health care access and other aspects of inequity.

Local governments are being forced to lead in a wholly unprecedented set of circumstances. We at the Government Alliance on Race and Equity (GARE) will work alongside you as you reassess your priorities and implement creative strategies to resolve the challenges that lay ahead.

The economic and social repercussions of Covid-19 are just beginning to unfold, and we expect your reliance upon colleagues in other local governments to increase as you seek promising practices that can be applied to your own community’s challenges. While you confront budgetary considerations such as downsizing staff, cutting public services, and putting off important programmatic initiatives, we will be present with you to share how our movement of people working in government to advance racial equity is developing innovative approaches to eliminate the racial inequity within our government practices, civic spaces and economy.