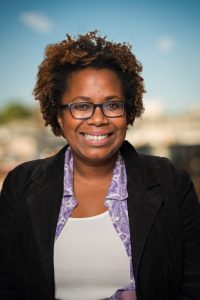 Spatial Data and Decision-Making with Alison Beason, Senior Policy Analyst for the City of Tacoma

What makes a city inclusive and livable? How can cities use their own locally-collected data to determine the areas and neighborhoods that have the biggest disparities? In this post, we speak with Alison Beason, Senior Policy Analyst for the City of Tacoma about the development of the Tacoma Equity Index, and how it was designed to help the City of Tacoma explore these issues and make more equitable decisions.

Q: Please describe briefly what you do for the City of Tacoma, and your involvement in the Tacoma Equity Index.

Alison: I used to work at the National Science Foundation and the National Institute of Health, but I wanted to come back home so I ended up coming back to work for the Office of Equity and Human Rights. The Office was tasked with creating a profile for the community of Tacoma, but they weren’t sure how to approach the task. I developed the Equity Index based on Opportunity Mapping, created by the Kirwan Institute for the Study of Race and Ethnicity. In 2003, Opportunity Mapping was designed to show disparities, and we wanted the Equity Index to function in a similar way – to spatially show disparities and differences in opportunities in communities.

Q: What were some of the biggest obstacles that you faced in the development of the Index?

Alison: A lot of people think that the technical development, the software and the statistical analysis are the hard parts, but I think the parts that people don’t consider are making sure that you get buy-in, and that you’re not collecting the same information twice. It took me a little over a year to develop this Index (in partnership with the Kirwan Institute), but the majority of the time spent was me working on the ground, trying to identify and collect all the datasets that we had in our city that were available.

I also wanted to make the index very accessible and relevant to all major City departments. Only 8 out of 20 indicators are derived from Census data. I wanted to make sure that this was personal regional data, and that we’re not trying to compare apples and oranges (like New York standards versus our small town of 210,000 Tacoma standards). So I came into the City, and instead of just like hitting the ground running like, “Oh I know how to do this,” I did a lot of networking, meeting with departments, seeing what kind of data inventory we had and what kind of information was available, what kind of information was open source and just trying to understand what is out there.

I also created a stakeholders group that met on a monthly basis. I called it the Data Share group and it wasn’t just for the Index. It was an activity where we met monthly and people had the opportunity to share their data, discuss what they were working on and sometimes do a practice run for any presentations they had coming up. During that time, I was able to find out new potential data sources for the Index I wouldn’t have known otherwise – for instance, I learned about how the Environmental Services Department doing something on urban tree canopy in partnership with the University of Portland.

I think the longest and the most difficult aspect of the project was collecting all that inventory, talking to departments, seeing what they had and making sure that departments saw themselves within the Index.

Q: Given that there are so many different sources of data, how do you ensure that data quality is consistent across sources, or collected in a way that would lend itself to the creation of this index?

Alison: When you work with ArcGIS or any geographic spatial analysis software, you need to make sure your data integrity is there. You have to ask yourself, are your addresses correct and accurate? In addition, you have to make sure that your data isn’t so specific that it’s identifiable at the individual level. For example, I wanted to incorporate infant mortality rate, so I analyzed the rate at the Census Block group level. Since we don’t have that many infant mortality cases it would have identified a particular household. Crime data also has to be considered in this way. I had to work with the Police Department because I didn’t want to identify particular addresses of crime and they helped me work with collecting tract information so that it wasn’t identifying.

Regarding the data quality aspect, it wasn’t just something like “John Smith’s data excel spreadsheet” that he’s been collecting internally by himself. When we decided to include a data source, it was always the source that the department used as their standard.

Q: Has this index been used to inform any decision-making by the City of Tacoma?

Alison: Yes it has. For example, Verizon came into our city and they wanted to incorporate 5G wireless. And the IT department didn’t have the manpower at the time to evaluate and understand the locations that needed it. But they knew geographically that they were planning to put 5G into the wealthiest areas. So they came to the Equity Office and said, “Do you have any kind of analysis or information I can use to convince them they should put this somewhere else?” Because the Equity Index was already developed and digital access was incorporated into the index, we used it to show them geographically that there were areas that would benefit more from having 5G.

Another example is when our Public Works Department was trying to make decisions about streetlights. In the City, there are 3,000 potential opportunity streetlights, which means that there’s an existing pole and all that they have to do is put a light on it. But the Public Works Department only had enough money for 200. Because of that, they came up with their own systematic way of prioritizing where to put them – for instance, if there are car accidents or crime that happens at night. They came to our office to ask, “How do we put an equity lens on this?” We used the Index to modify their original scores and helped them prioritize where to put the new streetlights based on what those disparities are within the City.

Q: What kind of advice would you have for city governments looking to do something similar, but maybe they don’t know where to start?

Alison: Make sure that you get buy-in and input and incorporate people from within the city, not just your jurisdiction. For instance, if you’re going to incorporate something like education, you have to work with the school district. You can’t just come in and say , “This is the standard of equity for education!” People get taken aback if you claim to be the expert. You need to work with people so that the metric is embraced. That’s been the most beneficial advice for me, because I’ve done a couple of these talks. And I feel like everyone keeps saying, “What does the community say? What do the departments say? You had to get people that didn’t like this!” And I just emphasized that I didn’t get much pushback because I worked for a whole year. I did a whole year of groundwork! Mary Morrison was a great supervisor that gave me that space to lay the groundwork. I think that was vital to not getting so much pushback.