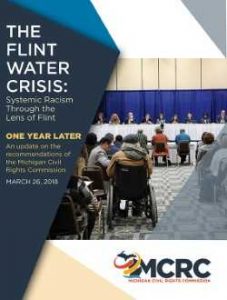 In February 2017, the Michigan Civil Rights Commission released their groundbreaking report, The Flint Water Crisis: Systemic Racism Through the Lens of Flint – the culmination of a year-long probe into the civil rights implications of one of the worst public health disasters in Michigan’s history.

In the end, the Commission’s findings were nearly as historic as the events that prompted them. Their conclusion: systemic racism played a significant role in causing the Flint water crisis.

The Commission did not stop with that stunning appraisal. They outlined seven recommendations that must be put into action in order to build a more equitable society and eradicate the race-based separation of wealth and opportunity that has plagued Flint for generations.

The Michigan Department of Civil Rights has now released a one-year progress report spelling out what we have done to further the Commission’s goals.

The short answer:  we have made progress, but we have a long way to go. None of the Report’s recommendations have been fully realized. Some are beyond our control while others are generational at best. Even if aspirational, the Commission’s recommendations provide a blueprint we aim to follow in order to build a more equitable and inclusive society.

The Commission’s first recommendation – that the Commission and Department must do a better job of authentically listening to the constituencies we represent and of making their priorities, our priorities – is the one we have the most ability to influence.  As a direct result of this investigation and our engagement with GARE, the Department is realigning all of our processes and initiatives to ensure that the goal of racial equity is at the heart of everything we do. Some specifics:

The Department is not only focused on changing internal practices. We are educating local and state government on the value of implementing policies and practices based on equity to close the gaps between white residents and people of color. These steps include:

The Commission’s recommendations are not a simple checklist that we complete and tuck away. They will not result in headline-writing solutions that make for a good 15-second soundbite. And they are not only about Flint.

The Commission’s Report covered more than 100 years of public policy – policy that in the beginning explicitly excluded people of color and evolved to implicit discrimination that created a persistent separation of wealth and opportunity based on race. Dismantling the societal structures that lead to this crisis will require tedious long-term work. But it is the work we must do if we want to ensure that what happened in Flint will not happen again.