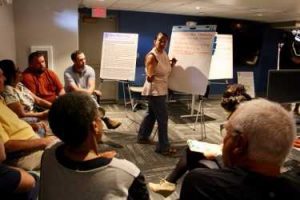 Structural racism – a term you don’t often hear spoken by a Mayor, particularly about her own city. But that’s exactly how our Mayor describes the need for the City of Grand Rapids to not only address racial disparities in our community but be a leader in this work.

We own this – a phrase the community has heard over and over again by our City Manager following a recent study of traffic stops made by our police officers. The study shows black drivers are twice as likely to be stopped by police in Grand Rapids than white motorists and Hispanic drivers are 1.3 times more likely to be pulled over compared to white drivers.

Since taking office in January 2016, Mayor Rosalynn Bliss has not minced words when addressing systemic racism and racial bias in our city, making it a top priority for her administration. This commitment, along with City Manager Greg Sundstrom’s 12-point plan to strengthen community and police relations and our participation in the first Racial Equity Here cohort with the Government Alliance on Race and Equity, we are positioned to move the needle on racial equity in real, significant ways.

As we continue on our racial equity journey with GARE, we are working with intentionality to address the inequities that we – the City – have created. Our City government has a long history of strained relationships with communities of color – chronicled in Mayor Bliss’ 2016 Book of the Year, “A City Within a City: The Black Freedom Struggle in Grand Rapids, Michigan” by Todd Robinson. This book provides a powerful historical perspective of the civil rights movement in Grand Rapids and the managerial racism that has contributed to the racial disparities we see today.

This reality, coupled with our work with GARE, prompted us to respond in a more intentional way to the results of the recent traffic stop study. Before, a typical response may have included sending out a press release, doing a few media interviews and putting the study on a shelf to collect dust – or worse, hoping community stakeholders had forgotten about the traffic study and quietly ignoring the results.

Instead, we owned the results, immediately holding a press conference to announce them AND our commitment to changing the outcome of our policing.

We didn’t stop there.

We held five meetings in the community versus at City Hall. The gatherings were held in each of the city’s three wards and in accessible spaces to ensure as many community members as possible could attend.

The first community meeting was held just a few hours after the press conference, followed by another one that evening and three the following day. The gatherings gave community members a chance to hear the results and methodology behind the study and, most importantly, ask questions and share their personal stories of interactions with police. The Mayor, City Manager, Police Chief, study consultants and City staff, including members of our REH team, participated in the meetings.

Using data from the traffic stop study, input from the community, the recent Equity Profile of Grand Rapids and other community indicators, Mayor Bliss and City Commissioners earmarked $1 million annually for the next five years to strengthen community and police relations.

The gatherings were held in neighborhoods throughout the city and included one in Spanish. Residents were asked to weigh in on six topics: communications, police officer training – particularly as it pertains to implicit bias – policies and procedures review, police officer hiring, the 2018 arrest disparity study and body cameras. Feedback from the sessions will be compiled for the City Commission to determine how best to use the money earmarked for community and police relations.

We also are putting together a Police Policy and Procedure Review Task Force. This group – facilitated by a national police expert and comprised of two residents from each of the city’s three wards, the Police Chief and police staff from every rank – will review our Police Department’s

policies and procedures to ensure they do not result in racial bias.

We believe these action steps and our continued work with GARE will advance our city’s goals around racial equity and significantly improve outcomes for all of our residents.

Assistant to the Mayor

The City of Grand Rapids, Michigan