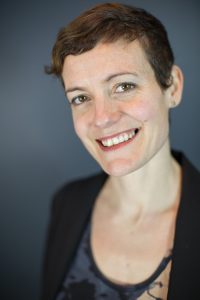 In this installment, GARE Research Assistant Juan Sebastian Arias interviews Diana Falchuk, Manager of Arts and Racial Equity at the City of Seattle, a shared position between the Office of Arts & Culture and Office for Civil Rights and part of the City of Seattle Race and Social Justice Initiative (RSJI).

Q: Let’s start by talking about your current role.

I’m just starting a position. I had been working as Deputy Manager of RSJI at a time when we didn’t have a manager. A piece of my work was in partnership with the Office of Arts & Culture (ARTS), but as Deputy Manager, I didn’t have enough time to focus on my passion for arts as way to bring about racial justice. I’m also a visual artist and performer, and I wanted to integrate creativity more into my government work. Now I’m still part of RSJI, but I’m sitting at the Office of Arts & Culture in a new role that really brings together my passions – Manager of Arts & Racial Equity.

I’ve always been a practicing artist and in college, I worked as a teaching artist in schools, museums, and other institutions. When I moved to Seattle, I worked as an artist in residence in the youth jail in Tacoma. We had a federal grant that asked us to find opportunities for young women on probation and diversion, so they wouldn’t end up back in jail. I ended up starting a post-release program called Arts Connect and working on it for 7 years. Through that, I got to see the depth of racism in the justice system. At the time, I was still seeing things at the individual level. I soon started to see that I needed to be working with institutions and systems, and on my own internalized racism, if I wanted to have the impact that I wanted to make.

I also started to feel the ways that racism was harming me as a white person. I started to feel how my actions and ideas were at times paternalistic and othering, which made me complicit in harming others. I also noticed the toll racism had on me, keeping me from fully connecting with my community, always spinning my wheels, never being the change agent I imagined myself to be. I didn’t yet have the language to communicate about race or to unpack the moments when I was an agent of a racist system. It became apparent to me that I needed to change, to learn the principles of anti-racism and liberation work, and what that meant at the policy level, as well as how to facilitate other people’s learning about race and racism. For me, this journey included going to get my Master’s in Social Work at the University of Washington, where I learned how to facilitate dialogues around race, class and gender, and did my second year practicum at RSJI.

There’s a quote by white anti-racist organizer Chris Crass in his 2015 book Towards the Other America about how white people, beginning in our educational system and throughout our lives, are “denied the powerful insights and inspirations from people of color movements, which have been at the heart of social justice efforts in this country.” This quote really speaks to my experience. This is a lesson for government too. As government workers, we get stuck in the norms and tactics of our institutions. We don’t often enough allow ourselves to be moved by communities of color – especially the ones that challenge our power and make us uncomfortable – or to look back at and learn from movements led by people of color. We rather choose to be in relationship with people who are most palatable to us, who affirm our power and the status quo. If we did listen, if we did allow ourselves to be moved, we could find a huge well of inspiration and guidance. I owe my understanding of this to some amazing women of color organizers in my life who have pushed me hard.

Q: What role do you think government has in addressing racial inequities?

Government has historically created, validated, maintained and reinforced the systems of racialization in our society. So, government has a great responsibility to leverage all at its disposal – its resources, relationships, policies and practices – to eliminate racism and imagine a world that is racially equitable. To do this, we must listen hard and true to communities of color, those who are most impacted, and also help others, especially white folks, who don’t yet understand the value of racial equity, to get behind it.

This is another role for government – to build public and political will for racial equity. Sometimes that’s right here within government. Oftentimes, that’s a lot of what I’m doing, and currently, we’re looking at ways to use arts and culture within our City processes to break down norms and open up our creativity. We’re also using our resources to support resilience, resistance and re-imagination in the community. For example, at ARTS, we’re designing a series of opportunities – workshops, trainings and speaking events – that bring together artists, organizers and activists to share creative practices for building racial equity in areas like criminal justice, housing, education, and transportation.

Q: Tell me a story of an accomplishment that you’re most proud of.

The first thing that comes to mind is the Turning Commitment into Action project, which GARE recently spotlighted on its blog. This work has created a ripple effect that has helped to open up honest dialogue around race and racism in the arts community, and also to create space for the kind of cultural shift work that true racial equity (not just diversity and access) demands.

I also want to point out something that highlights the necessary work that we can do every day as people organizing for racial equity from within government. Last year, an amazing, local, community-led movement called Ending the Prison Industrial Complex (EPIC has a campaign to stop the construction of a new youth jail ), successfully organized to have Seattle City Council publish an ordinance that allocated $600,000 for alternatives to youth incarceration. EPIC partnered with Social Justice Fund Northwest (SJF) to grant out the funds. (SJF uses an innovative giving project model, which is grounded in anti-racist, grass roots organizing by those who are most impacted by an issue – in this case, Black and brown youth – to grant out the funds.) EPIC asked the City to do something that we don’t usually do – to give the money directly to SJF months ahead of time and let their giving project members choose the organizations that would receive funding. Partnering in this anti-racist way, which really supported the leadership of those most impacted by youth incarceration, required a whole different role for the City as a funder – we weren’t setting outcomes, collecting reports or monitoring contracts. We had to let go of some of the control over resources that we always assumed was necessary, but which also perpetuated racism.

My role was to work across City departments to help people understand why this new practice was critical to building racial equity and to craft language in the contract that reflected this. My background setting up arts-based alternatives to incarceration, including King County’s Creative Justice program, helped me advocate. In the end, we learned that as a City, we can re-create our own processes, even those that are most entrenched, like how we allocate funds to the community. So often we forget that things are the way they are just because it’s how we’ve always done them. We have the creative power to shape things for all of our benefit. I think this moment in our nation’s history is forcing us to harness that power with greater urgency and collaboration.

There’s always some overt resistance. But in Seattle, because the initiative here is 13 years old, people know they have to say they’re for racial and social justice. But sometimes there can be a lot of talk and little action. So this is one thing that can be challenging – the “check the box” or “lip service” mentality.

This is why in 2015, several of us worked to pass a Citywide policy requiring each department to complete 4 Racial Equity Toolkits (RETs) a year, and to report on these in their annual RSJI presentations to City Council. Now all departments have more reasons to reach out to their RSJI Liaisons in the Office for Civil Rights and to our forthcoming RSJI Equity Lab (which will include a RET Center) to get help with their Toolkits. The RET is really just a mechanism to practice doing things in a racially equitable way, a way that’s accountable to communities who are most impacted. It’s a way to get out of that individual-level thinking and come at an issue with a systems approach that includes history, culture and lived experience.

Q: What do you see as the greatest opportunity for local governments to advance racial equity?

One of the greatest opportunities is to make a commitment to really, truly listen to the communities most impacted. This includes racial justice organizers who push us to confront the ways we’re enabling racism in our community. And to make time to talk with the whole community about why racial equity and why a targeted universal approach are the best approaches for everybody. So often, those who already have access to systemic power are the ones shaping our policies and procedures. Sometimes it’s based on fear and misinformation, and sometimes it’s limited by a narrow vision of what’s possible. We thus need to provide opportunities for these voices to be louder and to learn about what is another community’s experience. This is why the Racial Equity Toolkit is so useful. After you define what you think is the outcome you’re aiming for, you go to communities most impacted and check it – is this the outcome you think we should have? What are you experiencing? Communities can then feel like governments really represent them. I also think these processes have to be infused with creative strategies (arts and culture), so we can get out of our usual and experience what’s possible.

Q: What do you think is holding us back?

Part of it is not using the tools we have, like different types of racial equity tools, and part of that is not understanding how they work. But at its base, it has a lot to do with fear and lack of practice imagining beyond the status quo. I don’t mean people aren’t coming up with interesting policy innovations, but the process that gets us to innovative policy also needs to actually produce racially equitable results. It’s relatively easy for me, as a well-intentioned, white government employee in a management role, to come up with an idea and have that resourced through my networks. Instead, when we have policy ideas we need to vet them with communities of color. And even before that, we need to be working with communities of color who have an understanding of how racism works and are organizing for policy change, so that we’re not co-opting their work. As my RSJI teammate Tamar Zere recently reminded me, community always will be the “litmus test” for even the most well-intentioned institutions.