Home>Blog>Artists as Change Agents in City of Minneapolis Government 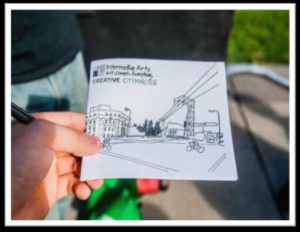 Artists are playing a critical role in shaping how the City of Minneapolis approaches its work advancing racial equity and inclusion.

As part of the Creative CityMaking initiative, city leaders are tapping the insights of artists who are helping the city enterprise embrace new ways of thinking and find ways to connect to communities historically underrepresented in the community engagement process.

Joy Marsh Stephens, an equity and inclusion manager for the City of Minneapolis, said artists can help people feel more comfortable when having discussions about equity.

“Artists can approach difficult and complex issues in a variety of ways,” she said.

Stephens collaborates closely with Gülgün Kayim, the City of Minneapolis’ Director of Arts, Culture and the Creative Economy.

“I see arts and culture as an on-ramp to equity,” Kayim said. “It helps us get toward asset based outcomes.”

The Creative CityMaking program launched as a collaboration with Intermedia Arts in 2013 before Marsh Stephens and Julianne Leerssen joined the City Coordinator’s Office as new equity and inclusion managers.

“It began really with us going to city departments with some grant funds asking them about their biggest challenges with the intention that maybe artists can help the department innovate and invent new ways of working because the program was really seeking to put artists in residence into city departments, and connect that residency more closely with the work the department was doing,” Kayim said.

Over time, they realized that artists could help alleviate some of the challenges city government faces when trying to reach out to people underrepresented in traditional city engagement efforts.

“The artists invented new ways to engage, explore and understand the conditions people were experiencing in these geographies to help the plan be more authentic to the community,” Kayim said.

The team involved in Creative CityMaking also realized that much of their work that had been successful focused on racial equity. At the same time, Mayor Betsy Hodges and several new Council members were also promoting a racial equity agenda. The vision for One Minneapolis, which is focused on eliminating racial disparities, became the ideal policy position to advance the work of the Creative CityMaking program.

The program has launched several successful projects, including equity work in the Neighborhood and Community Relations department, an electoral engagement project in the City Clerk’s Office and creative asset mapping in areas of the city with the highest concentration of poverty and people of color, among other things.

In the Dinkytown neighborhood near the University of Minnesota, artists created a mobile engagement unit that went out to the community and engaged youth on the street for a resident’s survey on their wishes/visions for the area – a neighborhood that has seen a big increase in development.

Artists asked residents to fill out a survey designed like a zine. About 850 people filled out the survey, including many young people, making up about 40 percent of the data for a small area plan for the neighborhood. The city’s Heritage Preservation Commission later initiated a Dinkytown Historic Designation Study as a result of the increased community engagement.

“We bring artistic processes to the table, and when you think about process, it’s more about critical inquiry, creative thinking and the creative skills to make things happen,” Kayim said.

The Tenants Voices project has artists collaborating with the city’s Regulatory Services Department. The goal has been to give renters, who make up more than 50 percent of the city’s residents, a larger role in the city’s decision-making process.

They have used theater-based techniques for a project with rental housing inspectors to make it easier to have conversations about power dynamics, race and the role of city employees in the community. Artists will also be conducting training with community members.

The goal is to create a culture where inspectors are partners with the community – not just enforcers of regulations.

“They have the ability to spot patterns and translate complex issues into forms that are accessible,” Morris said. “They have an ability to animate the conversation.”

Some artists have also reconnected with the community to share information learned during the engagement process, she said.

As the program continues to evolve, Morris said she hopes Creative CityMaking can help create a culture within city government that is more open, inclusive and responsive. She also hopes city leaders continue to embed artists and artistic resources into the work of city government as a way to foster a more equitable and inclusive Minneapolis. 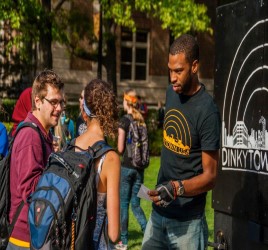 Moving forward, Kayim and Marsh Stephens are going to have a Creative CityMaking team focus on diving into the history behind Minneapolis’ racial disparities. They plan to collaborate with local historians and communities to give them a platform to tell their own stories. The first focus will be on Native American communities. Artists will lead staff and community in an exploration of the role of government over time as a contributing factor to the racial inequities facing Minneapolis residents, and the importance of understanding this history in order to foster greater equity and resiliency.

“We’re working on helping city staff understand histories that are misunderstood,” Kayim said. “Some staff don’t really understand how we got to where we are with these disparities.”

Office of the City Coordinator, City of Minneapolis