The People Behind the Movement: Jane Eastwood

Q: Let’s start with your role. What is it, and how does it relate to St. Paul’s racial equity work?

I’m the Director of the Saint Paul Public Library system. That’s 13 libraries and a bookmobile, serving a city of 300,000 people.
When I started my involvement in the racial equity work, I was the Education Policy Director for Mayor Chris Coleman. At the time, the Mayor had an education leadership roundtable that included the superintendent, the County Administrator, several elected officials, the Library and Parks directors and I staffed that body. The
superintendent at the time had also launched an extensive racial equity initiative in the school district. She believed
our disparities in academic scores were not tied to poverty, but also race. You could look at the performance of
middle and upper class African-American students, for example, and they still did worse in some instances than low income white students. 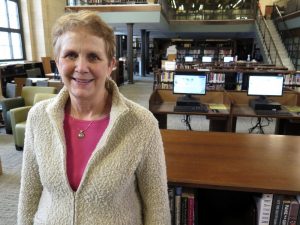 Q: How did you arrive to your role with St. Paul Public Library?

When the school district started a racial equity initiative, they invited the leaders of city and county government to participate in the two-day racial equity training. Sixty government leaders -including the Mayor, Deputy Mayor, County Manager, Police Chief and several elected officials – participated. It was transformative. We were convinced that the city needed to address racial equity in a deeper way.

In 2014, the City focused on training all 500 managers and supervisors with the same two-day experience. We also became one of the first cities nationally to begin working with GARE and taking their guidance. In 2015, we rolled out annual work plans and racial equity assessments for every department and launched our own one-day training to be delivered to every employee in the city by the end of 2017. The Library was the first department to send its entire staff through the training together. The previous library director wanted all 250 staff to be on the same page from the start. I’m glad that happened as it set the stage for us to get to work more quickly. Fast forward to late last year, I was appointed library director.

During racial equity trainings of the education roundtable, the Superintendent at the time was Latina and her Chief of Staff was an African American woman. Both said that they had never had racial equity training like the two-day one we later experienced and it was life changing for them. That dropped a deep cord in me and spoke to my own personal need to open my mind and look at who I was on the issue of racial equity. It was a profound moment.

Q: In your opinion, what role does government have in addressing racial inequities?

Government has an enormous role. We in government have so many services we deliver that make a difference in people’s lives. From roads to police to environmental services like recycling to lighting to parks and libraries, we impact people’s lives in many ways. Because we run the infrastructure of the city, our services can make life harder – or easier – for everyone. We need to make sure we don’t create unintentional barriers or discriminate in how we provide services and care for the city’s infrastructure. Government has a long history of intentionally creating and maintaining institutional racism. The threads of this still exist, and we need to address them directly, not maintain them.

Q: What are some of your proudest accomplishments in this role?

Personally, it’s being one of the leaders who advocated to launch our racial equity initiative and then got to develop our tools and training. We are fortunate to have support from top. I did not do it all alone but I was part of the work from the beginning. The library has staff that takes racial equity seriously, and we invite ideas from all levels, with the change team in the field and in the libraries. I’m proud of them all for participating in work and for putting forward and implementing their own ideas.

At the institutional level, one of our biggest accomplishments has been diversifying the staff. In five years, the Saint Paul Public Library has doubled the number of staff of color. We’re now at 40% staff of color, which mirrors the city population overall. We’ve also quadrupled the number of full-time staff of color. To be honest though, we did not start off in a good place. In Saint Paul, our unions had a “promote from within” rule, so to work here, you had to start at the bottom and work your way to the top. The professional and supervisory unions relinquished this requirement a couple years ago, which allowed the Library to hire new librarians and other positions from outside the city workforce. Because of those changes, we now have three librarians of color this year, up from just one, helping us start to change the face of our leadership in the library.

Another action we took was to encourage part-time staff to add a second part-time Library job if they wanted it to achieve full-time, benefit-earning status. We ended the year with an additional nine full-time staff of color through this practice change.

I think I speak for a whole lot of leaders who say ‘How do you keep this work front and center ?’ For example, how do you expose the practices, policies or issues that need to be analyzed usinga racial equity toolkit? What are the next services that need to be examined? And what do you when you have the data?

For example, we’ve been collecting data on two of our programs: story times and adult programs. We’ve been looking at the ethnicity of the presenters and of the audiences. We deliver storytimes to families in nine languages (including English) and do an annual survey of participation by race/ethnicity. We look at the data and ask questions like, “Aare Hmong families actually able to show up to our Hmong language storytimes? If not, what do we need to change?” Many of our storytimes in languages other than English are well-attended because the people presenting most story times are from the community. They help us connect the dots to get better participation.